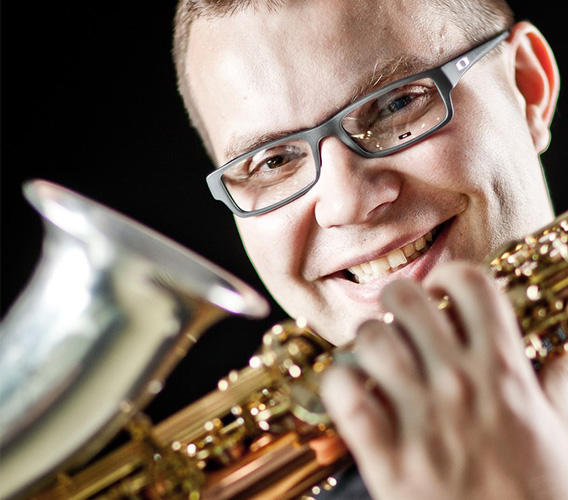 Kamil is a musician of great possibilities. He has a virtuoso aptitude and many ideas. He is a true professional with precise style. You can feel the honest spirit in Kamil’s playing. That is why I foretell him a beautiful future.

A jazz saxophonist, composer, arranger. He is a saxophonist that offers an interesting, individual sound of the saxophone, a musician that has improvisation skills in every style from the field of entertainment music and jazz, abundant improvisation ideas which fit into the canon of the required aesthetics for each music style.

His work includes multiple achievements in the classic and jazz music as well as very broad stage experience. He is very comfortable cooperating with other musicians. He cooperates with acknowledged bands and singers present on the Polish pop music stage. In 2007 he made his debut on Agnieszka Włodarczyk’s album ‘Nie dla oka’ (‘Not for an eye’). The same year he recorded his improvisations on the album entitled ‘Zaśpiewam Jezuskowi’ (‘I will sing for Baby Jesus’) performed by ‘ Symfonia Academica’ Choir and Chamber Orchestra. In 2009 Mezo’s album ‘Słowo ma moc’ has been released which contained a single ‘Zemsta’ (‘Revenge’), where Kamil Skorupski played the saxophone part. Since 2008 the artist has been cooperating with Podlasie Opera and Philharmonic, which resulted in the cooperation during the recording of Wojciech Ziemowit Zych’s album ‘Works for Orchestra’. For many years he has been the co-creator of Podlasie Singing Workshops educating the youth with vocal talents whom he also accompanied during ‘live’ concerts at Rembrandt Studio of the Polish Radio Białystok.

In March 2013 recordings were made for his original debut album.