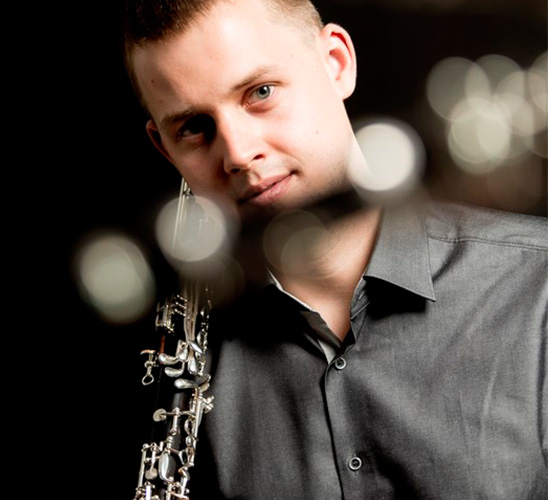 Mr. Grzybowski is an extremely talented musician. He has an ability of quick comprehension, excellent technical aptitude, and he has a beautiful, warm tone. He is a really ambitious person, who overcomes every obstacle with great zeal and intelligence. His clarinet talents, the musical and artistic ones, are on a high international level.

Krzysztof Grzybowski is known as an excellent soloist and chamber musician. Despite his young age, he performs with world-class artists. To name a few: Sabine Meyer, Wolfgang Meyer, Igor Levit, Andrei Ionita, Ivan Podyomov. Krzesimir Dębski, Mariusz Patyra, Katarzyna Budnik-Gałązka, Michel Lethiec and Jerzy Salwarowski. The acknowledged figures from the world of music have been enchanted by his play. Such composers as Paul Patterson and Krzesimir Dębski entrusted him with their clarinet concertos. He has also gained acclaim worldwide as the performer of Jörg Widmann’s music.

Season 2015/16 will be inaugurated by a Mozart concerto which he will perform with an excellent orchestra: ‘Harmonia Nobile’ Chamber Orchestra (conductor: Stephen Ellery) at the Philharmonic in Ivano-Frankovsk (Ukraine). In the upcoming artistic season he will perform, inter alia: Paul Patterson’s Clarinet Concerto, Aaron Copland’s Clarinet Concerto, Witold Lutosławski’s Dance Preludes or Krzysztof Penderecki’s Sinfonietta no. 2. The season will be concluded by a concerto with world-class pianist, Igor Levit, at the end of the prestigious Bad Kissinger Sommer.