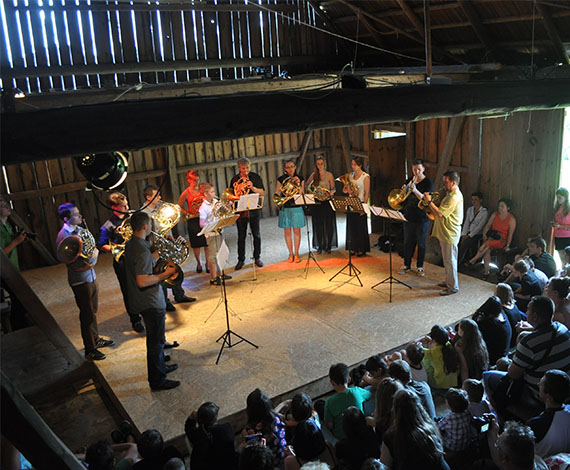 Teremiski Horn Camp is a workshop, where passion to music and fascination to nature are connected. Organized in climatic Teremiski village located in the heart of last preserved primeval forest in Europe – Bialowieza Forest – courses are great possibility to artistic growth and chillout in the bosom of nature.

Finished by one of a kind concert in the Barn Theatre, where music of Bach and Mozart is performed on the old, wooden stage Teremiski Horn Camp is the best opportunity for an active vacation. I Art Management supports and helps in organization of this musical venture.

Jacek Muzyk earned his master’s degree at the Mannes College of Music in New York City studying under David Jolley. He continued his education at the Juilliard School of Music under William Purvis and at Rice University in Houston, Texas under William VerMeulen. He played with the Houston Grand Opera and the Dallas Symphony before being appointed the Principal Horn with the Buffalo Philharmonic. He made guest appearances with the Chicago Symphony Orchestra, the Houston Symphony, Pittsburgh Symphony, Saint Louis Symphony, Saint Paul Chamber Orchestra and other orchestras in the USA, Asia, Europe, and South America, often performing as a guest soloist. After winning the Associate Principal Horn position with the Houston Symphony and performing there for a year, Mr. Music decided to go back to Buffalo and continues as Principal Horn for the Buffalo Philharmonic. He teaches in Eastman School of Music in Rochester, NY.